Land use planning is a key aspect for development of both urban and rural areas of any district in the country. The land needs in urban areas are dominated by the demand for building plots either for residential, commercial, institutional or industrial purposes.

The demand for surveyed land plots in urban Centres has exceeded the supply for the last five years in Mpwapwa District. By the end of 2011 the cumulative numbers of building plots surveyed were 777 in Mpwapwa (402 plots), of which 331 plots were allocated and Mazae urban centre managed to demarcate 375 plots and all of them were allocated. Other urban Centres of Kibakwe, Wotta and Chipogoro had no surveyed plots although the demand for plots was high. It is obvious that lack of surveyed building plots in most cases create a problem of crowded environment and mushrooming of slums or shanty town at the end.

In the planning of farms, grazing areas and human settlements in rural areas, the village is the first step. By the end of 2011, Mpwapwa District had managed to survey as many as 81 villages out of which only 3 villages were offered their village land certificates. More efforts should be directed at finishing the surveying of the remaining few villages and issue certificate to the already surveyed villages. 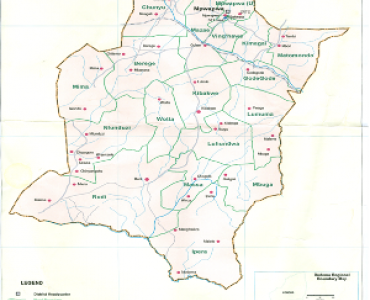