The economy of Mpwapwa District relies basically on agriculture, livestock keeping and minor small scale industries in the District. The Agriculture sector still employs more than 80% of the population residing in the Council. Most of the farmers rely on subsistence farming which result in small production hence low income. Crop production is ranked as first vital economic activity and livestock keeping as a second in rural Wards of the District. Apart from arable farming and livestock keeping, natural resource sector is another important sector in which people depend for their livelihoods. However, in most parts of the Council, agriculture is characterized by low productivity due to unfavorable climatic conditions. Council encourages farmers to cultivate drought resistant crops especially bulrush millet, sorghum and cassava.

Agricultural production in the District is dominated by traditional farming practices which typically depend on rain fed, farmers’ local knowledge and experience. Irrigation schemes are not fully developed. The area potential for irrigation in the District is 5991 hectares whereas only 2261 hectares is currently used for irrigation. Green Vegetables including tomatoes, egg plants are grown after rain season. This helps farmers to generate income.

Generally, farmers produce at subsistence level, this is largely contributed by use of poor farming tools such as hand hoes for tilling land. 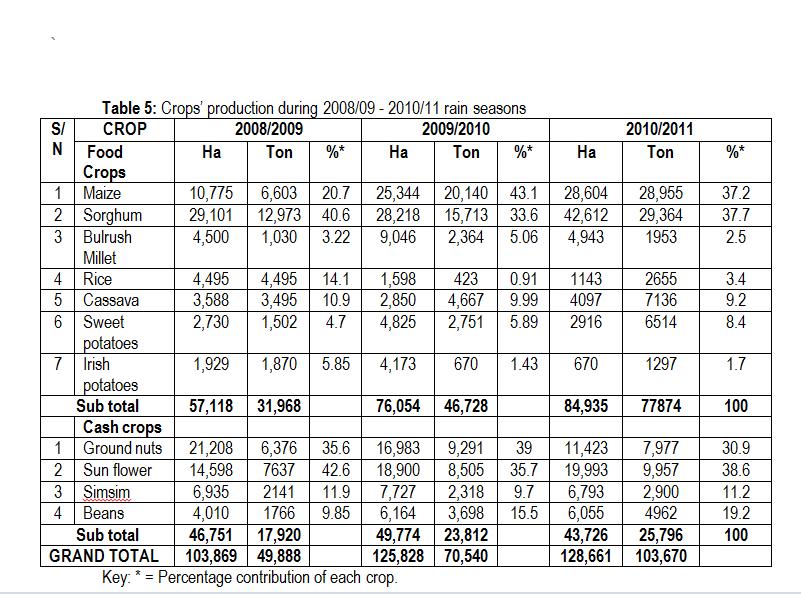 Low production was mainly contributed by inadequate, unreliable and poor distribution of rainfall.